First thoughts: Battlefront 2 is a beautiful game, despite the controversy. 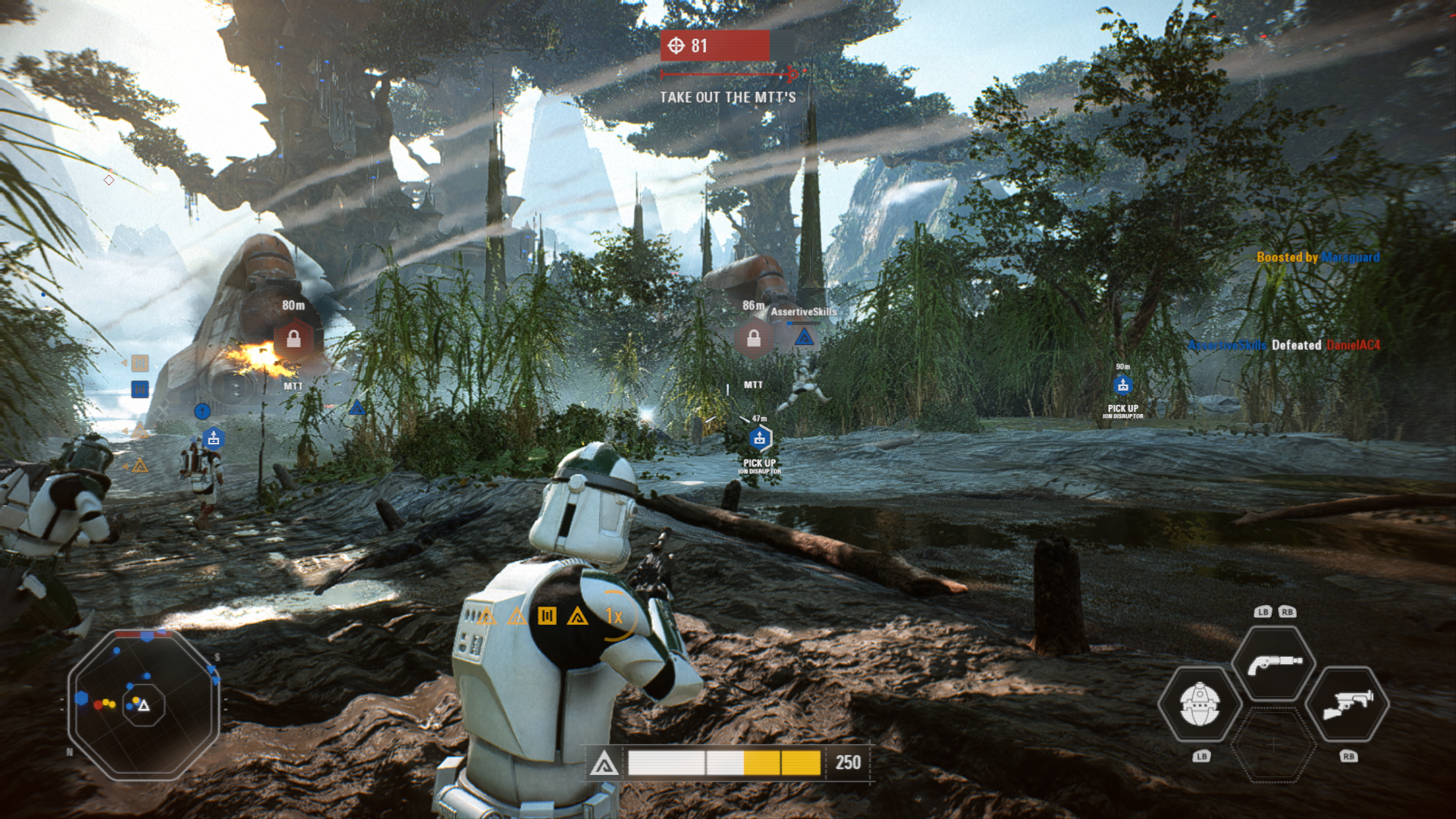 Star Wars Battlefront 2 is a beautiful game. After my first few hours of gameplay, I think it has a lot going for it. That’s in spite of the controversy around ‘loot boxes’ and progression.

Before I share my initial impressions of Battlefront 2, lets address the AT-AT in the room.

This week, Star Wars Battlefront 2 earned the dubious distinction of earning the most downvotes ever on Internet forum Reddit. The controversy surrounds the perceived heavy reliance on loot boxes in order to progress through the game and unlock equipment and characters.

These loot boxes (as implemented at early access launch) required massive amounts of gameplay to unlock popular characters. Alternatively – players could part with real cash to buy more loot boxes. That annoyed a fairly large number of gamers. Battlefront’s publisher (EA) has already been forced into making some changes to the game. In a follow-up Reddit post, the game’s developer, Dice, discussed some of the other changes it’s hoping to bring to the game. You can find summary of those proposed changes in this video by one of my favourite YouTubers, ‘BattlefrontUpdates’.

Personally, I think the changes that have been made already by EA are a step in the right direction. If they boost the credit earn rate (by say – making credits based on a higher % of your end of round score) – then this will probably address the concerns around how long it takes to earn enough credit to unlock everything.

I do wonder though if this is more of an issue for players who fancy themselves as competitive players and who want to ‘unlock all the things‘ as quickly as possible. As a bottom of the scoreboard player, I’m accustomed to having to choose a few precious items to unlock. Heck – there’s still a tonne of base-game weapons in Battlefield 1 I haven’t unlocked one year on! For that reason, I’m probably less heated up over the issue, especially if EA and Dice actually follow through and tweak the progression system over time.

With that out of the way – here’s some quick thoughts based on my first few hours with Battlefront 2. (Note: I am playing this game on XBox One. )

There’s no doubt about it, Battlefront 2 is visually stunning. Sneaking through the forests of Takodana (see video below), the way the light filters through the trees is beautiful. Night time battles are an incredible explosion of colour, as blaster fire arcs through the dark sky and explosions light up the night. Fans looking for a new way to explore the Star Wars universe should love the new maps and the attention to detail that has gone into them.

Class based play and special units add to the fun

In Battlefront 1, a soldier was a soldier. Sure, you could customise your playing hand a bit to vary your attacks, but every trooper had the same base stats. One of the things that is making Battlefront 2 more  enjoyable for me is being able to switch classes depending on the map and how fatigued I am. Because let’s face it – when I’m tired there’s no point trying to play a role that relies on reflexes (Assault) or accuracy (Scout). Bring on the officer class with their automated turret!

When you  then add in the special units like jump-troopers, death troopers, battle droids, vehicles and heroes – there’s a lot more ability to adapt your play to the map and the stage of the battle.

The CR-2 will be the first weapon to be nerfed

The CR-2 is one of the unlocked assault class weapons for anyone who bought the early-access edition of Battlefront 2. With a high rate of fire, decent damage and not too much spread at range, it’s a kick-ass weapon. For that reason just about every assault class soldier has been running with it in the matches I’ve played. It reminds me a lot of the EE-4 when it was first introduced in Battlefront 1. For that reason, I suspect it will suffer a similar fate and be tweaked.

Heroes are more terrifying – but accessible to all

Heroes just seem more terrifying in Battlefront 2. Maybe it’s the new abilities, or  being able to regenerate health – or the combination of both. Even more than in Battlefront 1, they have the ability to turn the tide of battle in the right hands.

But perhaps the best thing is that heroes are more accessible to bottom of the ladder players like me. I was pleasantly surprised to discover that if I had a decent game and saved my battlepoints, I could eventually access a hero. Better yet, because my accessing a hero doesn’t use up a limited ‘hero power-up ( as in Battlefront 1), I don’t feel guilty about having a go as a hero and sucking at it badly.

Spawn points and ‘retreats’ in multiplayer need to be fixed!!!

So what’s on my ‘needs to be improved’ wish list for  this game? Two things stand out at this point. Firstly, the spawn point is often so far away from the action that the tide of battle can turn sharply in the time it takes to rejoin the fray. Secondly, when a ‘retreat’ is ordered in Galactic Assault, I think the timer for the retreat needs to be extended. I’ve had a couple of instances already of spawning in just as the retreat is ordered and dieing because I didn’t make it to the in-play area in time. I don’t think I’m the only one who thinks the retreat timer needs to be longer, so hopefully that can be looked into.

Although I’m only a few hours into the game, I’m quite enjoying it. Compared to the prior game, it’s as visually stunning if not more so, there’s a lot more maps to play on, and the gameplay has more depth. Oh – and there a short solo play campaign mode – which I’m hoping to spend some time with soon.

If you were eyeing off this game but have been put off by the controversy my advice would be – take a breath, put the controversy aside for the moment, and consider taking a chance on what I think is going to be a pretty solid game.