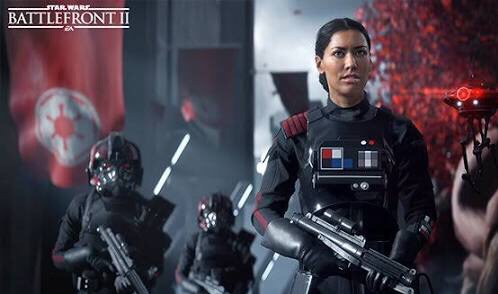 Can the upcoming ‘Battlefront 2’ strike the right balance between satisfying the hardcore shooter crowd and the Star Wars fan seeking a game that’s easy to pick up and play?

When it comes to first-person shooter (FPS) games, I’ll be the first to admit I’m a bit of a klutz. Even in my youthful peak my reflexes were never that great. Now, as someone on the north side of forty, I’m not going to delude myself into thinking things are going to get better.

And yet I still sink massive amounts of time into the FPS genre. A big part of the appeal is how easy it is to jump in and play an hour or so here and there throughout the week, without compromising on the experience. That’s in contrast to something story driven like Mass Effect, which is best enjoyed in longer sessions where you can really immerse yourself in the fictional world.

While I’ve dabbled with Halo and some of the earlier Battlefield games, it’s Star Wars Battlefront (SWB) and Battlefield 1 (BF1) that have consumed the bulk of my FPS playing hours since I upgraded to the XBox One.

So what if someone produced a game that combined the best of both these games?

That’s my hope for Star Wars Battlefront 2 (SWB2), due in November 2017. Based on what’s been revealed so far, this could become my new ‘go to’ FPS game, despite there still being a lot more content to come for BF1.

What am I hoping for in Battlefront 2?

Squads – running with a good squad in BF1 makes a lot of difference to my enjoyment of a game. For me, ‘good’ isn’t necessarily about the skill of the squadmates, it’s about having a group of people who want to play as a team and have fun together. Squads also enable players to coordinate a large enough group to make a difference in a game. The ‘partner’ system in SWB was fine if you just wanted to provide support for each other, but squad play can help turn a battle.

PTFO and Classes – As someone who sucks at the shooting’ bit of FPS I earn most of my points in BF1 playing classes like ‘Medic’ and ‘Support’, and by focussing on playing the objective. BF1 offers a lot more opportunities for earning points through these mechanisms, so I’m hoping we’ll see that carry over into Battlefront 2.

Gritty environments and weather in the Star Wars universe – Being able to explore locations in the Star Wars universe is part of the appeal of Battlefront. Whether that’s the icy cold of Hoth, the corridors of the Death Star or Jabba’s palace – as a fan it’s brilliant to be able to immerse one’s self in these worlds. What I’m hoping for in the upcoming instalment is the environment, like that of BF1, will be a little grittier. A bit more wear and tear on the environment, more destructible elements and dynamic weather. Snowstorm on Hoth anyone? Or fighting in the rain on Endor?

Pick up and Play – SWB was criticised in some quarters for being a bit too casual, and hence, lacking depth. In responding to these criticisms, I’m hoping Battlefront 2 doesn’t go too the other way. If I want hardcore, there’s still plenty of life left in BF1.

Between the various reveals, teasers, trailers, game changer coverage and beta trials – I expect we’ll be hearing a lot more about Battlefront 2 in the next few months. I’ve high hopes for this game based on the fun I had with the 2015 version of Battlefront, and the challenge I’ve enjoyed playing BF1. When launch day arrives on 17.11.17, I just hope the game lives up to the hype and that it still has some pleasant surprises in store.

ConstantlyRespawning.com welcomes all, whether your preference is Xbox, PlayStation, Wii, PC, MAC, Ios, Android, or TableTop. Comments are moderated and published at the discretion of the moderators. Comments that do not contribute constructively to the conversation at hand, contain excessive (uncalled for) profanity, or personal attacks will not be published. You may borrow images or a portion of the content if you be sure to link back to ConstantlyRespawning.com as the original source.

ConstantlyRespawning.com welcomes all, whether your preference is Xbox, PlayStation, Wii, PC, MAC, Ios, Android, or TableTop. Comments are moderated and published at the discretion of the moderators. Comments that do not contribute constructively to the conversation at hand, contain excessive (uncalled for) profanity, or personal attacks will not be published. You may borrow images or a portion of the content if you be sure to link back to ConstantlyRespawning.com as the original source.
Posting....